Ganj Nameh, literally translated as “treasure epistle”, is an ancient inscription, 5 kilometers southwest of Hamedan, near a natural waterfall, into a rockface on the side of Alvand Mountain, in Hamedan Province, Iran

The inscriptions were carved in granite in two sections. The one on the left was ordered by Darius the Great (521-485 BC) and the one on the right by Xerxes the Great (485-65 BC). Both sections were carved in three ancient languages: Old Persian, Neo-Babylonian and Neo-Elamite. The incscriptions start with praise of the Zoroastrian God (Ahura Mazda) and describe the lineage and deeds of the mentioned kings.

Ganjnameh sits along the ancient Imperial Road, that connected the Achaemenid capital Ecbatana to Babylonia. It was a safe and frequently traveled road and had much visibility during the Achaemeniad period. The inscriptions were studied in detail by the French painter and archaeologist Eugene Flandin during the 19th century. Subsequently Sir Henry Rawlinson, a British explorer, used the inscriptions to decipher the cuneiform characters of the era. 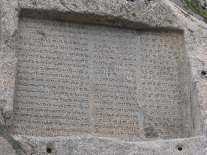 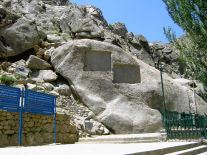 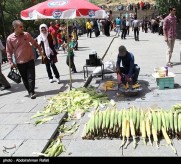 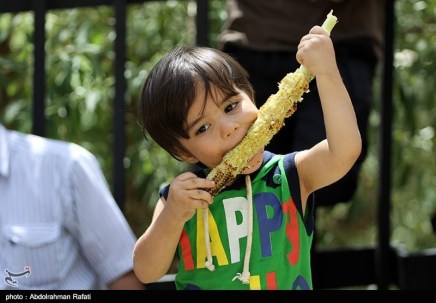 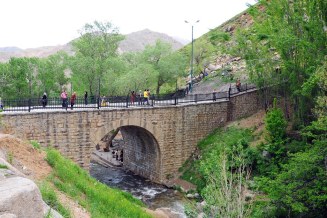 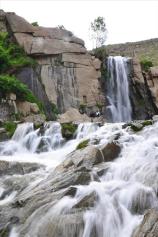 The translation of the text on the right plate, attributed to Xerxes, is: “The Great God Ahuramazda, greatest of all the gods, who created the earth and the sky and the people; who made Xerxes king, and outstanding king as outstanding ruler among innumerable rulers; I the great king Xerxes, king of kings, king of lands with numerous inhabitants, king of this vast kingdom with far-away territories, son of the Achaemenid monarch Darius.”

Later generations who could not read the Cuneiform alphabets of the ancient Persian assumed that they contained the guide to an uncovered treasure; hence they called it Ganjnameh which literally means “treasure book”, but it has also been called Jangnameh, literally “war book”, possibly due to the wrong assumption that the inscriptions described ancient wars of the Achaemenid era.

Two modern contemporary carved tablets have been placed in the site’s parking lot with Persian explanation and its English translation.

Unfortunately, this archeological site is in danger due to the construction of restaurants and entertainment centers in the vicinity of Ganjnameh that have changed the historic atmosphere and endangered the cultural and natural landscape of the area. Adding to these existing problems is the construction of a cable car nearby.