“Iran’s sympathetic response to the American tragedy has been exceptional for a country under US economic siege for two decades. Only hours after the Sept. 11 attack, President Muhammad Khatami condemned it, as did Supreme Leader Ayatollah Ali Khamenei. Other officials have sent sympathetic messages, including one from the mayor of Tehran to the mayor of New York – the first public official contact between Iran and the US since the 1979 Iranian revolution. […]

More important, 60,000 spectators observed a minute of silence during a soccer match in Iran’s Azadi Stadium, and hundreds of young Iranians held a candle-lit vigil in Tehran.”
Source: The Christian Science Monitor | US and Iran must work together against Taliban by R. K. Ramazani – September 24, 2001 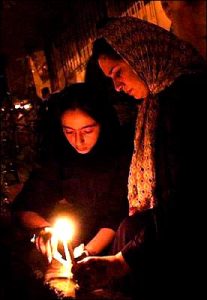 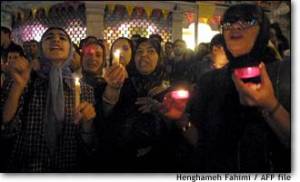 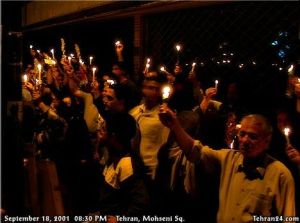 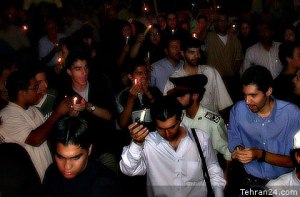 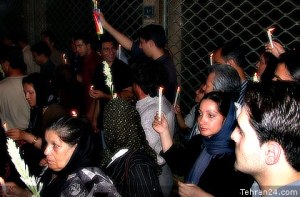 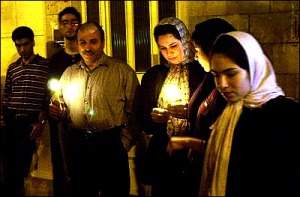 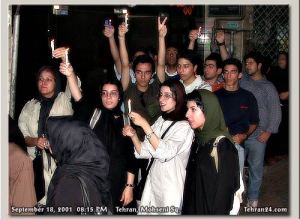 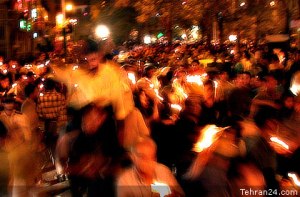 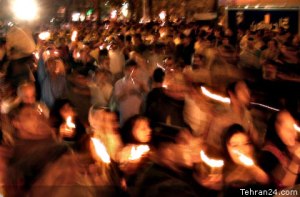 “Iranian women light candles in Tehran’s Mohseni Square in memory of the victims of the terror attacks on the World Trade Center in New York and the Pentagon in Washington DC. [see first picture above] […]

Even the most hardline Islamic clerics, who despise the United States, have been shocked into silence by the attacks. President Mohammad Khatami set the tone for Iran’s reaction with a statement that in Persian rang with deep compassion: ‘On behalf of the Iranian people and the Islamic Republic, I denounce the terrorist measures, which led to the killing of defenseless people, and I express my deep sorrow and sympathy with the American people.’ […]

‘Why should Americans deserve this? That’s a sick thought. They are just ordinary people like us,’ said Massoud Moshiri, as he bought cigarettes at a juice stand.” […]
Source: Times.com | Photoessay | Iran mourns America’s dead – September 18, 2001

On Tuesday, Ayatollah Khamenei, in his first public remarks on last week’s attacks, markedly failed to brand the United States an enemy. ‘Islam condemns the massacre of defenseless people, whether Muslim or Christian or others, anywhere and by any means,’ he said, adding pointedly: ‘And so Iran condemns any attack on Afghanistan that may lead to another human tragedy.’ […]

On Tuesday, more than than 3,000 mostly young people held a candlelight vigil in Tehran for the victims of the terror attacks, closely watched by security forces.

One reformist member of Parliament, Ahmad Borghani, even went to the United States interest section at the Swiss Embassy on Tuesday with a wreath of white flowers to sign the memorial book in sympathy with the family’s of the victims. ‘This tragedy has brought the two countries closer,’ he said. ‘But the United States must not expect Iran to cooperate in a military attack — considering our past relations.’
Source: The New York Times | World | A NATION CHALLENGED: TEHRAN; Iran Softens Tone Against the United States by Nazila Fathi – September 21, 2001

“IRAN — President Mohammad Khatami condemned ‘terrorist’ attacks on the United States”
Source: The New York Times | US | Reaction from around the world – September 12, 2001

“Iranian President Mohammad Khatami, a moderate who is struggling for power against the country’s hard-line Islamic leaders, expressed ‘deep regret and sympathy with the victims’ and said ‘it is an international duty to try to undermine terrorism.’ ”
Source: FoxNews.com – September 12, 2001

“And in Iran, Tehran’s main football stadium observed an unprecedented minute’s silence in sympathy with the victims. Iran’s Ayatollah Imami Kashani spoke of a catastrophic act of terrorism which could only be condemned by all Muslims, adding the whole world should mobilise against terrorism.”
Source: BBC News | World | Americas | Islamic world deplores US losses – September 14, 2001

“Even in Tehran, where anti-American chants are all too common, thousands of people attending a World Cup qualifying match between Bahrain and Iran observed a moment of silence.”
Source: The New York Times | US | AFTER THE ATTACKS: THE VIGILS; Surrounded by Grief, People Around the World Pause and Turn to Prayer by Dan Barry – September 15, 2001

“In Iran, antipathy toward the United States was set aside as 60,000 spectators and players observed a minute of silence at the Tehran soccer stadium before a World Cup qualifying match.”
Source: Spartanburg Herald-Journal | REACTION ABROAD | World grieves along with America by Audrey Woods from Associated Press – September 15, 2001

“Iran’s Supreme Leader, Ayatollah Ali Khamenei, has strongly condemned the suicide terrorist attacks in New York and Washington. ‘Mass killings of human beings are catastrophic acts which are condemned’ he said ‘wherever they may happen and whoever the perpetrators and the victims may be’. ”
Source: BBC News | World | Middle East | Iran condemns attacks on US – September 17, 2001

“Last week, Ayatollah Ali Khamenei of Iran, one of the most conservative and anti-American Muslim clerical leaders, called the fight against terrorism a ‘holy war.’ He joins a host of learned Muslims who have loudly condemned terrorism as forbidden in Islamic law in the wake of the attacks on Sept. 11.”
Source: The New York Times | Opinion | Islam and the opposition to terrorism by Roy Mottahedeh – September 30, 2001

“After news of the Sept. 11 terrorist attacks spread to Tehran, hundreds of Iranians, students, merchants and housewives joined in a candlelight vigil in a downtown square. Many were crying. Three weeks later, I am still approached by ordinary Iranians, in restaurants, Internet cafes and on the street, telling me how sorry they are, and how worried they are about the ‘American war’ that is about to begin, just next door.”
Source: NBC News | Inside Iran, a nation conflicted by Jim Maceda – October 7, 2001

“On the evening of September 11, 2001, about two hundred young people gathered in Madar Square, on the north side of Tehran, in a spontaneous candlelight vigil to express sympathy and support for the United States. A second vigil, the next night, was attacked by the basij, a volunteer force of religious vigilantes, and then dispersed by the police. […]

The statement that Mohammad Khatami, Iran’s popularly elected President, made was extraordinary — extraordinary to American ears, at least. ‘My deep sympathy goes out to the American nation, particularly those who have suffered from the attacks and also the families of the victims,’ he said. ‘Terrorism is doomed, and the international community should stem it and take effective measures in a bid to eradicate it.’ ”
Source: The New Yorker | Letter from Tehran | Shadow Land by Joe Klein – February 18, 2002

“Iranian Students are calling for pro-american demonstrations, marking 9/11
A Public Call For Rememberance of the 9/11 Tragedy […]
Now, with the first anniversary of 9/11 tragedy upon us, as SMCCDI expresses its sympathy to the families of the victims and survivors of that ungodly event, and the honorable nation of America; it invites all free spirited Iranians to honor the memory of the victims of that day by gathering and lighting a candle in front of the main entrance of the Tehran university and major public squares in Tehran, and the main squares in other cities and townships, from 6:00 PM till 9:00 PM, on Wednesday 11 September.”
Source: daneshjoo.org | Post 1873 by SMCCDI Political Committee – September 10, 2002

“Finally, I’ve found a pro-American country. Everywhere I’ve gone in Iran, with one exception, people have been exceptionally friendly and fulsome in their praise for the United States […]. Iran is also the only Muslim country I know where citizens responded to the 9/11 attacks with a spontaneous candlelight vigil as a show of sympathy. ”
Source: The New York Times | Opinion | OP-ED Columnist: Those Friendly Iranians by Nicholas D. Kristof – May 5, 2004

“Ordinary Iranians have long had a softer stance toward the West than their leaders; after the Sept. 11 attacks, Iranians held a spontaneous candlelight vigil in Tehran.”
Source: Chicago Tribune | News | Contenders for Iranian presidency talk up U.S. by Evans Osnos – June 12, 2005

“Mourners held a spontaneous candlelight vigil as thousands of people took to the streets of north Tehran chanting, ‘Death to terrorists.’ Iranian soccer fans observed a minute of silence before a match with Bahrain. Even Supreme Leader Ayatollah Ali Khamenei condemned the attacks: ‘Mass killing is wrong, whether it’s in Hiroshima, Bosnia, New York, or Washington.’ During Friday prayers at Qom, Ayatollah Ibrahim Amini said that the Iranian people grieved with the relatives of those killed, and the traditional slogan ‘Death to America’ was absent from the crowds’ mantras.
Source: Command Posts | Focus on: 9/11, Iran | After 9/11: The United States and Iran by David Crist – September 11, 2012

Other must read Iran-USA news: The other Iran | Tag | USA

8 thoughts on “Iran’s exceptional reaction to 9/11 attacks: candlelit vigils for the victims and 60k soccer fans respected a minute’s silence”