Iran’s Pallet music band has launched its new international concert tour with a successful performance in the US city of Portland. The group went on stage in Portland, Oregon on September 11. The tour will continue with concerts in 11 other US cities and wrap up in Washington D.C on October 4. 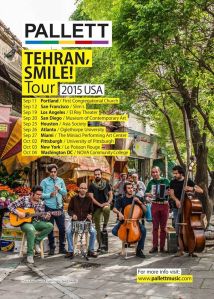 According to bandleader and clarinetist Rouzbeh Esfandarmaz, Pallet will perform pieces from its two albums ‘Mr. Violet’ and ‘Tehran, Smile.’

The fusion band Pallet has held many concerts in Iran and other countries such as France, Germany, Sweden, Italy and the Netherlands.