Filmmaker Asghar Farhadi and actors Shahab Hosseini and Taraneh Alidoosti got an overwhelming welcome in Tehran after arriving home from the 69th Cannes Film Festival, where Farhadi won the best screenplay prize and Shahab Hosseini received the Palme d’Or for best actor.

The film, whose screenplay was also written by Farhadi, is about Emad (Hosseini) and Rana (Taraneh Alidoosti) who move into a new flat in the center of Tehran. An incident linked to the previous tenant dramatically changes the young couple’s life. 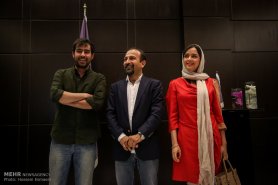