Her father, Hamid Alidoosti, is a former member of the Iranian national football team and currently a football coach in Iran.

Career as actress
She began her acting career at age 17 with the leading role in Man, Taraneh, panzdah sal daram (I Am Tarane, Fifteen Years Old), (Rasul Sadr Ameli, 2002). Critics praised her performance as a defiant 15 year old girl who after a failed relationship is determined to rear a child on her own, while struggling with poverty and social stigma. She won the Bronze Leopard for Best Actress from Locarno International Film Festival in 2002, as well as the Crystal Simorgh for Best Actress from the 20th Fajr Film Festival, becoming the youngest ever to do so. Shortly after she set another record, getting nominated three consecutive times for the best actress prize at the Fajr Film Festival for her first three films. Since then she has maintained a steady but selective work flow in both theatre and cinema. She is mostly known for her choosy criteria in accepting challenging, dramatic roles, as exemplified by her long collaboration with Oscar winner Asghar Farhadi, making her one of the most acclaimed actresses of her generation. 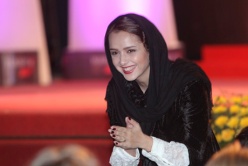 Blogging/Writing
In addition to her acting career she is also known for her writing as featured in her personal weblog . Additionally, her short stories and commentary pieces have been widely published in magazines and daily newspapers such as Shargh. In 2010, a piece written in support of director Asghar Farhadi, defending his comments in support of dissident Iranian artists, caused her weblog to be closed by government officials. Her new weblog however is active now. A collection of stories by Canadian author Alice Munro collected and translated by Taraneh Alidoosti, was published in 2011. It received the prize for best fiction translation at annual Book of Season Awards. She is fluent in English and German.