Before the New York-based multi-instrumentalist, composer and producer Bob Belden brought his band ANIMATION to Tehran, Iran, last month, it had been more than 35 years since American musicians had performed in the Middle Eastern country. Belden and his group performed to a sold-out, ecstatic audience of appreciative fans at Tehran’s Vahdat Auditorium and also got the chance to see parts of the country and meet with local residents. 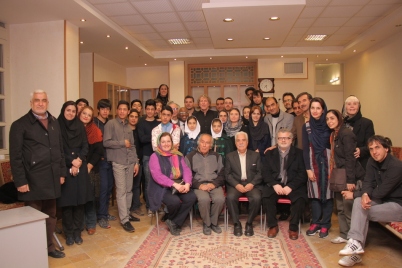 Here parts of the Interview with the bands lead Bob Belden:

Did you have any resistance or other challenges from either American or Iranian officials?
BB: We never met nor saw any American officials and the Iranians officials we met and worked with were fantastic; a beautiful sense of humor, visionary, erudite and very open about our music. No challenges at any point during our stay in Iran. None! Smooth sailing from day one till we left on day nine, excepting some logistical issues beyond our control (huge traffic jams and the lingering effects of jet lag). Actually the only real challenge we had was eating all of the food that was laid out before us for breakfast, lunch and dinner. The city of Isfahan gave us credit to purchase gifts to take back home.

Where did you perform and what was the venue and the audience like?
BB: We had three gigs, only one with ANIMATION. The first “gig” was at a private school in Isfahan where young kids (ages 6-14) learn classical Iranian music. We listened to them perform and then jammed with them at the end of the informal concert. The second gig was only myself and Pete Clagett on trumpet and we performed at the Azadi Sports Complex in Tehran during the World Greco-Roman Championships. What was significant about that gig was the group we played with: eight Iranian musicians including three women in the group. We performed the traditional Iranian national anthem (“Ey Iran”) but what made this moment special was the inclusion of women at a sporting event in a Muslim country. Never happened before. Our final gig, the gig that was our purpose for being in Iran, was held at the old Tehran Opera House now named Vahdat Hall. A classical opera house by German design, the acoustics and the sound system were perfect. The stage crew was first-rate all the way. Great gear and a fantastic Iranian-American engineer Hamidreza Maleki recorded the event.

Were the Iranian people welcoming to American musicians?
BB: Incredibly welcoming. Everywhere we went the people we met we very happy to see us and then astounded that we were musicians and then euphoric that we played jazz. The word jazz means a lot to people outside the U.S. And we did come in contact with a lot of Iranians from all walks of life. We hung out at a Starbucks in Isfahan and met a lot of younger Iranians and we ended up posing for a lot of photos with those at the cafe. The Starbucks is not official but a personal note to Starbucks in the U.S.: huge market in Iran for your coffee and brand! (I don’t drink coffee but the cafe also had tea!).

There’s a photo of the audience giving the band a standing ovation. What did the people you spoke to there say about the music?
BB: The applause spoke for everyone at the concert. We got a lot of hits on Facebook from Iran and even people from the audience posting photos and sending pictures to the guys in the band. We did not go there to find exacting understanding of what we played (this does not exist in the U.S. either) but to find a common need for expression. Everyone in the audience at the hall just enjoyed the music outright and, most important, the Ministers of Culture and Guidance were in the front row applauding not only our concert but their effort to bring us there. We all made the gig!!

What was your perception of the Iranian people’s understanding of and appreciation for jazz?
BB: There has been a gap of information as to the specific development and nature of jazz in the U.S. since the Iranian Revolution in 1979. Mostly the Iranians have been exposed to Europeans as the travel restrictions were not as difficult for musicians from Europe. That is why in Europe what we did is not deemed so important. I can’t speak for an entire country’s understanding of any music so I have no real idea of their appreciation of what anyone in the U.S. calls “jazz.” But it did not matter as the music culture in Iran is very deep and is thousands of years old. So they could relate to us based on pure musicianship, beyond the contextually limited language of jazz.

What would you like Americans, many of whom have been taught that Iran is not a U.S.-friendly nation, to know about the country and its people now that you’ve seen it first-hand?
BB: Perception is easy to create. Misperception is hard to break. In the U.S., for the most part since the Iranian Revolution, Iran has been subjected to a political and cultural analysis that is always shone in a negative light. It was as if thousands of years of history were negated to a footnote and the only history we intend to maintain in the U.S. is from 1979 onwards. This myopic view is not based on logic but composed of a systemic ignorance of global culture that is enabled by a weak education system in the U.S. and intense partisan calibrations meant to maintain a dark cloak of intrigue about Iran by people or entities that have agendas not expressed in their public statements. But a country is also made up of people, actual human beings, and this is what is most important for American citizens to understand. At the human level Iranians are the same as Americans. They eat food, they drink water, they have children and send them to schools. The parents fret over their kids just as parents here. People work for a living, they go to the movies, watch TV, ride the subways or buses to get to and from work. Young women scream at rock concerts for their favorite band. The traffic is similar to Los Angeles. English is spoken openly and quite well. Street signs are in Farsi and English. Magazines are in English and there are English newspapers. They have their own Burger Kings (called King Burger!), KFCs and pizza joints mixed with traditional Iranian food. And we ate at a truck stop that was emblazoned with the words FAST FOOD. For jazz musicians the words Truck Stop and Fast Food make you homesick!!

We could not sum up an entire country’s psyche in a week’s experience inside the country. Iran is a glorious and complicated country that lives in many different worlds at the same time, from the ancient to the modern. The people we met and worked with are beautiful people by any cultural definition. Sincere charm, subtle elegance and a very cosmopolitan demeanor were common in many of the people we met. Iran possesses a graceful and pastoral understanding of Islam. What we understood from being in an Islamic country is that if you use common sense and display an open respect for others then there is no problem at all reconciling the two views.