The 32-year-old midfielder, known as Ando – or Samurai, due to his hairstyle – is not shy of showing his Christianity, often crossing himself on the field. In April 2015, Teymourian, who has played for Bolton Wanderers and Fulham, became the first Christian to lead Iran’s football team as its permanent captain. His first appearance as captain of the national team was however on 18 May 2014, when Teymourian captained Iran in the match against Belarus. In the same year he was named “Iranian footballer of the year”.

“I’m happy that as a Christian I play in a Muslim team,” he said in a recent interview. “I have Armenian roots but I hold the Iranian passport and I’m proud of that, I hold my flag high. I hope I can enhance the good reputation of Armenian people in Iran.” 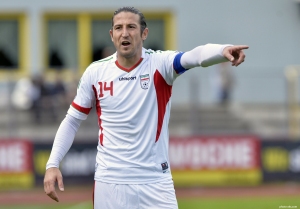 Ethnic Armenians make up the majority of Iran’s estimated 300,000 Christians. Armenians are fully integrated in Iranian society, from the musician Loris Tjeknavorian to Sombat Hacoupian, who founded one of the country’s most famous men’s clothing brands and is now a household name.

Although Islam is Iran’s official religion, it recognises Christians, Jews and Zoroastrians as accepted religious minorities. They are permitted their house of worship and usual religious services, and have reserved seats in the Iranian parliament. In a country where alcohol and pigmeat are forbidden, Christians are allowed to distil booze and eat pork.

There are at least 600 churches in Iran, including the sixth-century St Mary Church of Tabriz, mentioned by Marco Polo in his travel book. The adjacent province of West Azerbaijan boasts the ancient St Thaddeus Monastery, a Unesco world heritage site.

All minorities related posts on this blog: The other Iran | Minorities (with lots of interesting photos)