“London, Tehran, Rome, Amsterdam, Reconsider Your Image Of Me” will play from November 16 to December 12 of 2014, every night (apart from Saturdays), at 21:00 o’clock in the Hafez Hall, Tehran.

This performance, a co-production between the Virgule Performing Arts Company (Iran) and STET The English Theatre (Netherlands) is supported by the Embassy of the Kingdom of the Netherlands. The opening ceremony was held on Sunday, Nov. 16 with the Dutch ambassador to Tehran attending the ceremony.

The performance examines a current topic between Iran and the West, namely what are the images that we have of ‘the Other’ and to what extent fears, fantasies and imaginations are based on truth. By initiating a direct meeting with the Other and listening to each other’s stories, this group aims to create new images, based on the stories of the people who wouldn’t usually make the headlines. 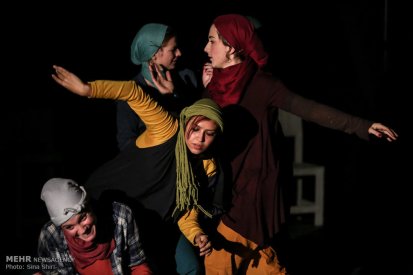 The piece is a multi-media, highly physical, speech performance. It includes the actors’ own stories, dialogue between the actors, video installations with short documentaries about daily life in the countries of origin of the actors and video collages of cultural milestones from these cultures. The physical form of the piece produces a third language.

The project has brought together an international cast to create this piece during a 2 month rehearsal period in Tehran. The company includes Dutch actress Marene van Holk, Italian actress Marta Paganelli, British actress Amy Strange, Iranian actresses Melodie Aramnia and Neda Jebreilli and Iranian actor Meysam Mirzaei, and the piece has been conceived and directed by Arvand Dashtaray.

The production will be performed in the Netherlands in the autumn of 2015.