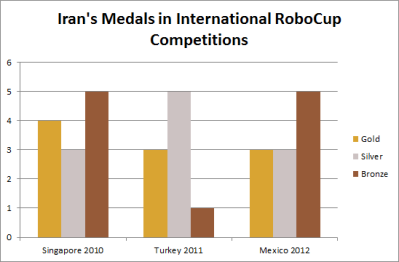 The first gold medal in RoboCup that I can remember of goes back to 1999. Unfortunately I only have german sources for that: derStandard.at, heise.de

About RoboCup
RoboCup is an annual international robotics competition founded in 1997. The aim is to promote robotics and AI research, by offering a publicly appealing, but formidable challenge. The name RoboCup is a contraction of the competition’s full name, “Robot Soccer World Cup”, but there are many other stages of the competition such as “RoboCupRescue”, “RoboCup@Home” and “RoboCupJunior”. (Source: Wikipedia | RoboCup)