Falak-ol-Aflak Castle (in Persian: Dez-e Shapur-Khwast and in ancient times known as Dezbar as well as Shapur-Khwast) is a castle situated on the top of a large hill with the same name within the city of Khorramabad, the regional capital of Lorestan Province, Iran. This gigantic structure was built during the Sassanid era (226–651).
Source: Wikipedia | Falak-ol-Aflak Castle

Papak Fort or Babak Castle (in Azerbaijani Baezz Qalasi), also known as the Immortal Castle or Republic Castle, is a large citadel and National Symbol of Iranians on the top of a mountain in the Arasbaran forests, which is located 6 km southwest of Kaleybar City, East Azerbaijan Province, northwestern Iran.
Source: Wikipedia | Babak Fort 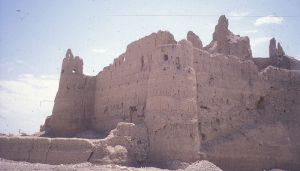 The Narin Qal’eh or Narin Castle is a mud-brick fort or castle in the town of Meybod, Yazd Province, Iran. Structures like these constituted the government stronghold in some of the older (pre-Islamic) towns of central Iran. Some of these castles incorporate mud bricks of the Medes period and of the Achaemenid and Sassanid dynasties.
Source: Wikipedia | Narin Qal’eh

3 thoughts on “Castles in Iran since pre-islamic times”