Mahmud Hesabi (February 23, 1903-September 3, 1992) was a prominent Iranian scientist, researcher and distinguished professor of the University of Tehran.

At the early age of seventeen he obtained his Bachelor’s in Arts and Sciences from the American University of Beirut. Later he obtained his B.A. in civil engineering while working as a draftsman. After a short period of time he obtained a B.A. in mathematics and astronomy.

In 1947, he published his classic papers on “continuous particles”. Then he proposed his model of “infinitely extended particles” in 1957. The medal of the commandeur de la Légion d’honneur, France’s greatest scientific medal, was awarded to him for his achievements.

Mahmud Hesabi was the only Iranian student of Albert Einstein and during his years of scientific research he had meetings with well-known scientists such as Erwin Schrodinger, Max Born, Enrico Fermi, Paul Dirac, Aage Niels Bohr, and scholars such as Bertrand Russell and André Gide. 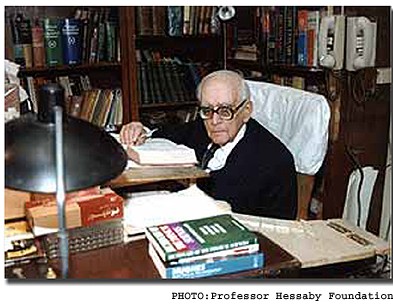