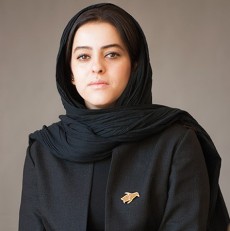 Newsha Tavakolian, an established photojournalist and art photographer, started her experimental career at 16. After a while she pursued it professionally in Iranian and foreign media. Two decades on, her social recognition and awareness has catapulted her into the ranks of the outstanding photographers.

Zanan-e Emrooz magazine released an interview with Newsha in its 7th issue (December 2014) about her career and life. The following is an excerpt  of it, published in Iran Front Page:

Why did you pick photography? Was anybody in your family who did photography?
At first I knew nothing about photojournalism. I did it for money. My parents were in Germany for my dad’s surgery, and my siblings and I were in Iran. Apart from financial problems, I found the education system annoying. Later I learned that I was suffering from Dyslexia at school but nobody knew about it. Back then I didn’t want to rebel; it was just a normal reaction to the tough conditions of the time…. after dropping out of school, I took photography at my mom’s suggestion and used everything as a subject for photography. […]

Once you said you always wanted to narrate the story of your subjects. Are your recent collections your narration of the characters? […]
My first work was Mothers of the Martyrs Collection: photos of mothers whose sons had been martyred. The undeniable resemblance between mothers and sons was interesting. […] Two reverse trends: a son who has remained in his youth with a cheerful face and a mom who looks emaciated because of the loss of her son. I just selected the backgrounds for the pictures and there was no other intervention on my part. […]

I just show part of their lives and leave the remainder to the imagination of the audience. I like to see viewers get involved in the story of my photos, not just their beauties. None of my photos has a strange surreal atmosphere. They feature the familiar scenes we pass by each day, but we now pause to watch the photos and they make us think.

For instance, the visitors of the Look Collection (2011) told me they felt as if they were watching themselves in those photos. This shows that I have successfully represented a typical character type in the photos. Drawing on my experiences in photojournalism and social documentaries, I’ve reached this point. My photos feature the middle class; that’s why more people identify with the characters in my work. […]

“When I shot these images, it was a dark time in Iran’s history,” says Newsha Tavakolian. “It was a time of extreme pressure on the public, especially on the youth, who were all struggling under the imposed restrictions.” Curious about the isolated lives of the middle-class youth in Tehran, Tavakolian staged images based on the real stories of her friends and neighbours to depict a society that the photographer believes is often reduced to exaggerated stereotypes in western media, and to give a more accurate portrayal of “normal people” in Iran. 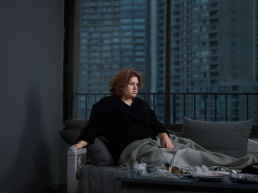 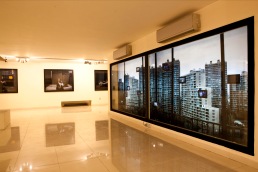 As a photojournalist, you not only covered the news on Iran but also news stories in the region, including the Iran-Iraq war. How was it like?
Back then I was 21. In Iraq I was accompanied by two American women. When we left Iraq after the war, they had other projects to work on and show themselves, but I came across closure of newspapers [in Iran] and a stagnant situation in which you would be consumed by inaction.

After one and a half years I realized that I’d spent too much time on something which I couldn’t change. I admitted that I was living in this country with all limitations and I needed to redouble my efforts to work here. […]

I refocused my efforts on upgrading my works. You cannot believe how terrible I was in photography and how much I worked on it. I’m the harshest critic of myself. I relentlessly review my works in order not to let others find any faults with them; I don’t let anybody undermine my self-confidence either. I constantly evaluate and challenge my works, and I think this is a forwarding method.

At the time of war, I was among the first photographers who were in Iraq. I sent my photos through my agency to Time and Newsweek magazines. They didn’t know I was a girl. Well, this heartened me because my works were put above my gender. […]

Where do you think the world is heading with too many photos available? Today mobiles and tablets don’t miss even one single moment. ….
I don’t walk down this path. I don’t produce a big volume of photos. I’m stingy in photography. I feel responsible for taking any photo. I’m stingy even in sending the feed to my eyes and mind. I wouldn’t look at just any video or photo because I wanted to train my eyes.

You are not supposed to watch anything just to spend time or relieve tiredness; otherwise your sight will get sick, just like you don’t eat anything just to fill your stomach. Perhaps these photos are helpful for future historians not to encounter any ambiguity […]

As a professional photographer, is your life affected by news? Is news still tragic for you?
Pieces of bad news send chills down my spine. I’m still involved in photojournalism. It is a labor of love. Let me give you an example. After a tough period of hard work – a four-month trip to 13 countries for filming and photography for an educational project – and facing problems with the Carmignac Foundation, I was in the Netherlands where I decided to go to the beach and have a rest. It coincided with the crash of a Malaysian airliner in Ukraine. The families of the Dutch nationals who were onboard the [doomed] plane went to the airport to ask about their loved ones.

I rushed to the airport when I heard the news. I was unaware that I had no camera, so I collected one at the airport and started to take photos. Nobody was waiting for my photos.

About one month ago I went to Iraq for a personal project. I didn’t snap the most important photo I could take and wrote it instead*.

You’ve travelled to many countries. Have you ever thought about migration given that your husband is not Iranian?
I’m still in Iran because it is the only place where I can use all my senses: anger, happiness, concerns, etc. My Iran photos are the strongest. It’s hard for me to let go of what I’ve developed an interest in. Luckily my husband is interested in Iran too.

I like Iran despite its shortcomings to which I don’t turn a blind eye. This society’s problems bother me and I cannot remain indifferent to them. If I live here and like it, I should do whatever I can for it. […]

Tell us about what you’ve changed in yourself through your own constructive criticism.
Whenever I hold a camera, I imagine it’s my first time. […] Each day I try to gain new things. It all started when I returned from Iraq. I could either suffer from postwar depression or forget whatever I had experienced in order to return to normal life. I chose the intentional forgetfulness in order not to be entrapped by sentimentalism, and not to regret the past. Never do I think about the past. I face the future. Each time I reach the end, I start from scratch.

———————–
* A Thousand Words for a Picture That I Never Took, Newsha Tavakolian, Sharq newspaper

Newsha Tavakolian (born 1981 in Tehran) is an Iranian photojournalist and documentary photographer. She has worked for Time Magazine, The New York Times, Le Figaro, and National Geographic. She is particularly known for focusing on women’s issues in her work, and has been a member of the Rawiya women’s photography collective, she co-established in 2011. She lives and works in Tehran.

Career
Born and brought up in Tehran, Tavakolian is a self-taught photographer. She began working professionally in the Iranian press at age of 16, at women’s daily newspaper ‘Zan’, after a 6-month photography course. At the age of 18, she was the youngest photographer to cover the 1999 student uprising, using her Minolta with 50mm lens, her photographs were published in several publications.

She got her international break in 2001 at age 21, when she met J.P. Pappis, founder Polaris Images, New York at photography festival in Perpignan, France. Thereafter, she began covering Iran for Polaris Images, in the same year, and started working as a freelancer for The Times in 2004.

In 2002 she started working internationally, covering the war in Iraq for several months. She has since covered regional conflicts, natural disasters and made social documentary stories in Iraq, Lebanon, Syria, Saudi Arabia, Pakistan and Yemen. Her work is published in international magazines and newspapers such as Time Magazine, Newsweek, Stern, Le Figaro, Colors, The New York Times, Der Spiegel, Le Monde, NRC Handelsblad and The New York Times Magazine.

Countering the predominantly male western dominance on photojurnalism in her region, she brought together a group of six Middle Eastern women photographers, uniting them in the RAWIYAH collective.

A common theme in her work is photo stories of women, friends and neighbours in Iran, evolving role of women in overcoming gender-based restrictions, and contrasts the stereotypes in western media. Her photo projects include Mother of Martyrs (2006), Women in the Axis of Evil (2006), The Day I Became a Woman (2010) and Look (2013), which opened at Thomas Erben Gallery, New York City.

She was part of the 2006 Joop Swart Masterclass organized by World Press Photo. In 2007 she was a finalist for the Inge Morath Award. Her work has been exhibited and collected at institutions such as the British Museum, the Victoria and Albert Museum, Los Angeles County Museum of Art, the Museum of Fine Arts, Boston and Somerset House, London (April 2014), where she was one of eight Iranian photographers featured in the critically acclaimed “Burnt Generation” exhibition.

In 2012, her first book “The Fifth Pillar” was published by Gilgamesh publishers in London, covering her personal take on the annual Muslim pilgrimage, the Hajj. More recently, Newsha was commissioned by the Qatar Foundation to travel around the world for 3 months taking photographs for a book about education to be published in March 2014. Also in 2014 Newsha was a member of the 2014 World Press Photo competition jury. Her work will be exhibited in Paris in November 2014, where also her new book will be launched. After Paris the work will go on a tour to London, Frankfurt and Milan.