Mehrdad Oskouei’s ‘Starless Dreams’ (Royahaye Dame Sobh) along with ‘Fuocoammare’ (Fire at Sea) by Gianfranco Rosi have won the Amnesty International Film Prize at the 66th Berlin International Film Festival. Rosi’s documentary film about the refugee crisis in the Mediterranean off the Italian island of Lampedusa, won also the Golden Bear prize for Best Film.

Oskouei, one of Iran’s best documentary filmmakers, explores in ‘Starless Dreams’ the anguish and joys of girls in a juvenile correctional facility on the outskirts of Tehran. His small, all-male crew spent 20 days talking to the young women who gave them surprising access to their lives and feelings. The film won in Iran the Best Documentary Director Award at the 34th Fajr Film Festival earlier this year. 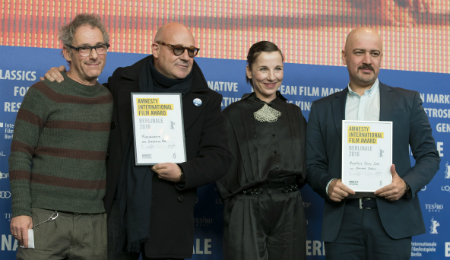 About Mehrdad Oskouei
Oskouei, an independent producer, filmmaker, photographer and researcher, was born in Tehran, Iran in 1969. He has a B.A. in film direction from the University of Arts, starting in the theatre in 1981 and the film world in 1988. In 2010, Oskouei received the Prince Claus Award from the Netherlands.