An incredible tournament-high production of 40 points from Iranian star Rasoul Aghchehli ejected the Asians to a remarkable bronze medal as they won over previous champions Russia 3-1 (25-17, 26-28, 25-16, 25-23).

Iranian captain worked at their maximum and he completed 36 spikes and 4 blocks, to break all previous records. Rasoul was escorted by Mirbabak Mousavigargari and Aliasghar Mojarad, with 13 and 12 points respectively. On top of that, Rasoul won a terrific battle of opposites over powerful Russian Dmitry Yakovlev, who led his side with 26 tallies. Yakovlev had in middle-blocker Aleksandr Melnikov his best supporter with 13 points, but it wasn’t enough to stop the Iranian machinery. 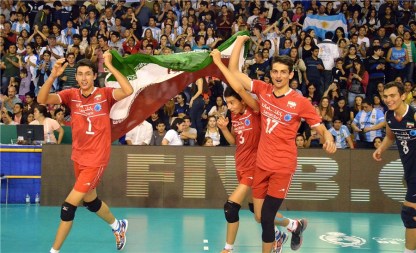 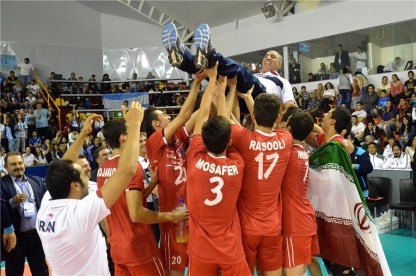 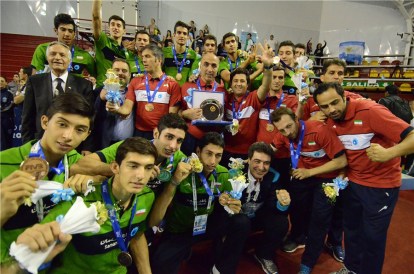 Iran finished second behind Poland on the group stage, winning against Germany on the round of 16 and although they were only a few inches away from elimination, Iran resurged from ashes and achieved a spectacular return to rule out Italy 3:2 (17:25, 22:25, 25:20, 25:20, 15:11) and move to semifinals, where they lost against champion Poland 3:1.

Iran improved his previous run with the step onto the podium, as they were left out on the very verge of it on Mexico 2013, finishing fourth. Russia fell out of the top, as the gold medal will now change hands.

Iran U19 national volleyball team
Iran’s youth team have won seven gold medals and a silver medal – the best record in this age group in the Asian region. Last year, the team earned the qualification ticket to the FIVB Volleyball Boys’ U19 World Championship in Argentina after an unbeaten run in the continental championship. The result is the product of a long-term project of Iran to serve as a farm of talents for the senior men’s team. In the World Championship, Iranian youth have been a consistent force in the final, finishing with a gold medal in 2007, two silver medals in 2001 and 2009, a bronze medal in 2003, and a fourth place finish in the last edition.