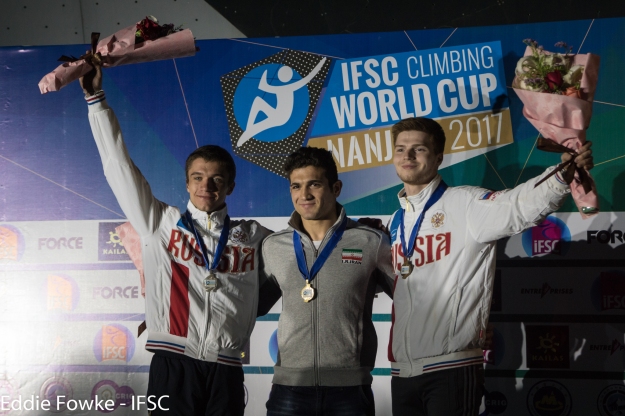 The previous men’s speed world record was set at 5.60 seconds by Danyil Boldyrev at the 2014 IFSC World Championships. Reza Alipourshenazandifar posted a new men’s speed world record of 5.48 seconds in the semi-final race against Bassa Mawem of France, who finished 4th. The Iranian star registered no times above 6 seconds, and completed the historic weekend with a victory in the final against Aleksandr Shikov of Russia. Vladislav Deulin finished in 3rd place.

The IFSC Climbing World Cup is a series of climbing competitions held annually and organized by the International Federation of Sport Climbing (IFSC). The athletes compete in three disciplines: lead, bouldering and speed.

Since 2007 the IFSC has created a standard wall for the world record. The holds and order are always identical, and the difficulty rating is around F6b, which is a level most recreational climbers could complete.