Iran have been crowned champions of the 2016 FIBA Asia U18 Championship after beating Japan 71-65 in the final held at Azadi Basketball Hall in Tehran. It is the third time Iran have won the title of this competition after previous wins in 2004 and 2008.

The hosts lost to Japan and Korea in the group stage, but dethroned the three-time reigning champions China in the quarterfinals and won against Korea in the semifinals. Korea got past Lebanon 86-63 in the 3rd Place Game.

Iran, Japan and Korea will represent Asia at the 2017 FIBA Under-19 World Championship in Egypt. 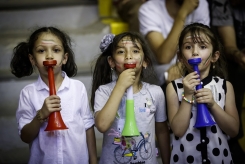