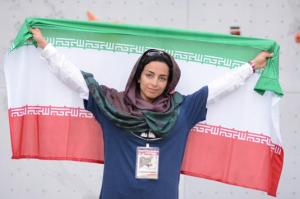 Zohreh Abdollah Khani, born on September 30th, 1984 in Karaj, Iran. She is currently Iran’s ice climbing champion and Asia’s bronze medal holder. She became the first female ice climber to win a medal for Iran at an international venue, when she finished third in Women Speed at the 2014 UIAA Ice Climbing Asian Championship in Cheongsong, South Korea.

The photo gallery was taken during Abdollah Khani’s training by reporters of Borna News.

Below a video of Zohreh Abdollah Khani