In preparation for the joint concert, Rahbari was in Beijing rehearsing with the China Philharmonic. “It’s a very nice orchestra,” he says. “I hadn’t been to Beijing before, but I am familiar with Chinese musicians and the way Chinese think. Over the past 40 years I’ve conducted a lot of orchestras with Chinese musicians.

“It took us just an hour and 40 minutes to finish rehearsals on the first day. This is a well disciplined orchestra. Good orchestras have similar qualities. When they get down to work, they’re not Chinese or Iranian or German; they’re all musicians. 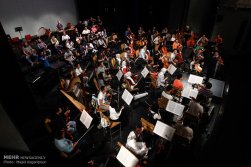 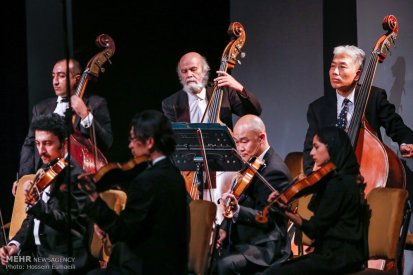 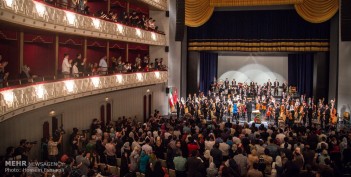 Rahbari’s positive feelings about the orchestra seem to have been reciprocal. Zhao Yunpeng, the first cello, says: “He’s charismatic and he’s got very sharp ear. He seems to be able to pinpoint problems very quickly. […] We knew little about him before but the rehearsals have been terrific.”

The China Philharmonic Orchestra’s two-night appearance in Teheran is the fourth stop on a 14-day tour taking in five countries (Kyrgyzstan, Tajikistan, Kazakhstan, Iran and  Greece) on the Silk Road.

About Alexander Rahbari and the Tehran Symphony Orchestra
Rahbari first conducted the Teheran Symphony Orchestra about 40 years ago, before the Islamic revolution, when the orchestra was in its heyday and hosted the likes of the violinist Yehudi Menuhin and the choreographer Maurice Bejart.

Rahbari left Iran in 1976 and did not return for another 30 years. In 2005 he was invited to rebuild the Teheran Symphony Orchestra but turned down the offer on political grounds. But eight years later, when Hassan Rouhani was elected Iran’s president, he promised to revive the 80-year-old orchestra and invited Rahbari back.