Two galleries in Tehran are holding a retrospective of painter and sculptor Bahman Mohasses (1921-2010) in a joint project entitled 60 Pieces of a Lost Object from May 22 to June 12, 2015.

A selection of artworks containing pieces from different periods are put on display at the Arya and Ab-Anbar galleries. Rare abstract works by Mohasses along with his lithographs, sculptures and paintings are on display in both exhibits.

The exhibit is a follow up to the extensive project of reviewing works by contemporary Iranian artists initiated by Arya and Ab-Anbar galleries, the first of which was dedicated to painter Sirak Melkonian.

Related article: The other Iran | Fifi Howls from Happiness: Documentary on B. Mohasses 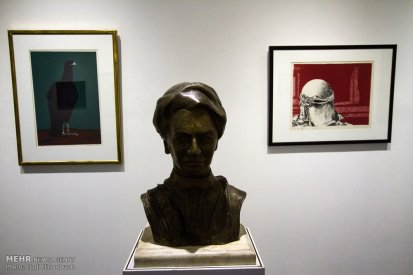 About Bahman Mohasses
Born in 1921 in Rasht, Gilan Province, Mohasses was an outstanding painter and sculptor as well as a good translator. Persian translations of works by Italian authors Italo Calvino and Curzio Malaparte, and French authors Eugène Ionesco and Jean Genet are some of his other accomplishments. He studied at the Academy of Art in Rome, and held several solo and group exhibitions in Italy and other countries.

Mohasses returned to Iran in 1963 and staged the play “The Chairs” by Ionesco. Some years later in 1967, he decided to go back to Italy and continued living in Rome until he died. He used to visit Tehran every now and then but few were in touch with him.

Some of his valuable artworks are preserved in Italy and the United States while others are kept in Iran at the Jahan-Nama Museum of the Niavaran Palace and the Tehran Museum of Contemporary Art.