Fish & Cat (from Persian transliterated as Mahi va Gorbeh) is a 2013 mystery drama slasher Iranian film directed by Shahram Mokri. The film was first premiered at the 70th Venice Film Festival in September 2013.

“Selected in 2014 for New Directors/New Films (the annual spring showcase from the Film Society of Lincoln Center and the Museum of Modern Art in New York, USA), Fish & Cat heralds the emergence of a fresh and original new voice in Iranian cinema combining formal experimentation with a sly sense of humour.”

Shahram Mokri’s second feature initially seems as if it might be the first Iranian slasher movie, but things are not always as they appear. Filmed in one long, bravura shot by top cinematographer Mahmoud Kalari (A Separation), it plays mind-bending games with time and place while a pair of potential serial killer cannibals stalk a group of camping students at a lake. 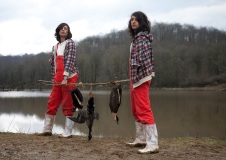 “In my short films I was trying to define a new meaning of time, of it being on one plane—very similar to the perspective Escher revealed in his paintings. I attempt to make type of experimental film that shows a new side of what the audience is used to seeing. On the other hand, Fish & Cat was produced due to my interest in slasher and genre films. I wanted to make a movie that would challenge our regular thoughts about time, and also one that used the same old genre structures. For Fish & Cat I took a real-life case and made it my own. It’s also a film that focuses on the Iranian youth generation. Because the film was been shot using just a single one, we rehearsed the film for two months exactly like we would have a theater performance. I decided to prepare with long rehearsals and we ran through the full movie twice a day. The actors do have theatrical backgrounds, so their experience being in front of an audience was helpful throughout.” – Shahram Mokri