The Mofakham Mirror House (Persian: Ayeneh Khaneh Mofakham) in Bojnourd, the capital of North Khorasan Province on the border with Turkmenistan, served as official residence. In 1975 the Mirror House was included in the list of National Monuments of Iran.

The building, completed mid-1870s, is an oblong-shaped two-story construction consisting of nine chambers. Famous for its mirrorwork used for interior decoration as well as its rich tile design, belonged to Sardar Mofakham, a senior official of the late Qajar period. 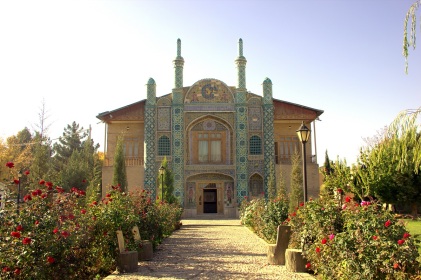 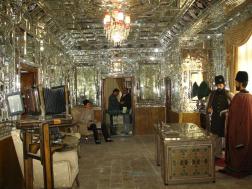 “The House of Mirrors Mofakham” is one of the architectural jewels of the Nasser-e-Din Shah Qajar era. In the past it was located in the middle of a large orchard at a close distance to other buildings as the Hozkhaneh, “The Garden of fountains”, and the Kolah Farangi Building. Together they constituted the “Dar-ol-Hokumeh” (House of power).

The Kolah Farangi Building collapsed following the earthquake that shook the city of Bojnourd but Mafkham Mirror House and Building remained to this day.

The Mafkham Building was constructed as Sardar’s Mofakham residence. It maintains thirty-four chambers and two large halls. The façade is covered with tile works, depicting humans, animals, and geometrical shapes. The building is fully covered with tiles in different shapes and forms in blue, yellow, pink, purple, white, red, and black colors, while each pillar has been decorated with particular patterns and designs.

The building now houses the Museum of Ethnography Bojnord (Mofakham Museum). The video below is a visit of Press.TV to the Mofakham Museum: