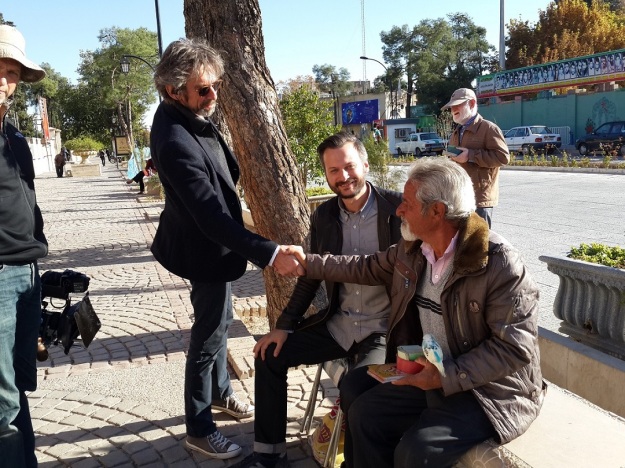 Thomas Erdbrink and Roel van Broekhoven, the director of the series on the Dutch television channel VPRO, answered some of your questions about living and reporting in Iran.

Q. What do you think Americans and Iranians would be most surprised to learn about each other if we could sit down for dinner in each other’s homes?
A. For starters, the Americans would learn that crisp rice from the bottom of the pot in which it is cooked is a delicacy here. In fact, Iranians love it so much that whole families fight over it during lunch, the main meal of the day in Iran.

Around the dinner table it’s all about family in Iran. Relatives come together often, especially these weeks, as Iranians celebrate their new year, which started on March 21. If they were to visit America, they’d expect food courts in shopping malls. These have also sprouted up in Tehran and other cities.

I guess what they’d learn is that, across the world, families are really not that different. They all like to sit down together, eat and talk. — Thomas Erdbrink

Q. Is there a Sunni population there or other minorities? How are they treated?
A. My mother-in-law, who taught me to speak Persian, is an Iranian Kurd. She is a proud and strong woman, loves Iranian Kurdistan just as much as she loves Iran. Kurds are Sunni, but not like Arab Sunnis. Her husband is Shia. They have been happily married for almost 38 years.

Now while there are issues for religious minorities, such as Christians, Zoroastrians and Jews, they are in much better positions compared with minorities in other countries in the region.

In Iran, those minorities have their own members of Parliament and are granted their places of worship. There are dozens of synagogues in Tehran, and thousands of Jews here — the most in the region after Israel. — T.E.

Q. How does an average Iranian feel about Jews and Israel?
A. Iran’s leaders often call for the end of Israel, calling the country a “tumor” that needs to be removed. They are against Zionism, the national movement for the return of the Jewish people to their homeland and the resumption of Jewish sovereignty in Israel. But Iran’s leaders almost never speak out against Jews.

Why would they, as Iran is home to the largest population of Jews in the Middle East after Israel? Where Jews have left most other countries, thousands have remained in Iran, where they are not persecuted. Ordinary Iranians have no specific ideas about Jews, though some Iranians might have the same prejudice you would hear elsewhere in the world.
Continue reading the main story

The policies of Israel are, however, widely despised here. Many Iranians might not feel drawn to Arab issues, but last summer’s war in Gaza turned many moderate Iranians against Israel. The speech by Israeli Prime Minister Benjamin Netanyahu in Congress also made many Iranians angry, as they heard him trying to undermine the nuclear deal that so many people here are hoping will happen. — T.E.

Q. You try to bring perspective in our view about Iran. How do Iranians look at our Western society? Is there any perspective, despite the government-controlled media?
A. Over the past decade, riding a wave of technological changes such as the wider availability of the Internet and satellite television, and inexpensive travel, Iranians have become more in tune with the world. Many Iranians in the cities are up-to-date on the news, the latest music and trends. Generally, Iranians know that in the West, contrary to what many here believed in the past, the streets are not paved with gold. Still, state television is the largest medium in the country and has the widest reach. Its broadcasts are often anti-Western and highly ideological. — T.E.

Q. Have these reports been vetted/censored in any way by the Iranian authorities?
A. No, there was no censorship, nor were the films vetted or seen before they were first broadcast on Dutch television.

We worked with a local production company. They organized permission for us to visit the places and people we were interested in. Sometimes they told us some locations or people they didn’t want us to come and film, or it was impossible to visit.

On the whole, we were pretty free to film whatever we wanted. There was no demand to see what we did film, or to show them the edited material in advance. Of course, Thomas has been living there long enough to judge what stories we could tell. — Roel van Broekhoven

Q. Are you free to discuss anything you want with friends and acquaintances? Do they share their views on politics, government, society, religion freely with you, or is there a culture of fear?
A. Step into a shared taxi here in Tehran and your fellow passengers will start talking about everything, from the weather to the effect of the sanctions to their opinion of the president. People talk very freely here, in small groups. There is no culture of fear. But that definitely doesn’t mean that everything can be said, all the time, not only politically, also culturally. — T.E.

Q. Is there a start-up or tech community in Tehran? What are entrepreneurs like?
A. Yes. There is the Tehran start-up weekend, which brings together tech entrepreneurs. Iran has a large number of highly educated engineers, some of whom are doing quite well in tech. Iran’s Amazon is called Digikala. There is Fidelio, a restaurant guide, and many more. — T.E.

Q. Can Iranians have Gmail accounts? Can artists do business w/Americans?
A. Google still blocks its business email accounts in Iran, as part of American-imposed sanctions. The answer to this question is written on such an account, which I can only access using software that makes it look as if I — an employee of an American news organization — am actually online in San Jose, Calif. For artists, there are no restrictions, but credit cards are blocked under U.S. sanctions, as are international bank transfers. — T.E.