Baran Kosari, born on October 17th 1985 in Tehran, is an award winning Iranian actress. She is the daughter of director Rakhshan Bani Etemad, and film producer Jahangir Kosari.

In 2007 she was nominated for the best performance by an actress in Asia Pacific Screen Award for her performance in Mainline. Baran Kosari also ascertained her abilities as a theater actress with playing in Over the Mirror (1997), with Azita Hajian directing. 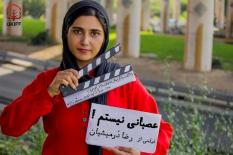