Get this headline writers – Iran may just be the friendliest place in the world!

It’s certainly the friendliest country I work in. I smile and laugh as much in Iran as I do at home in South East Asia’s Lands of Smiles…

Whenever we stop for a wander in a small Iranian town there’s an echoing chorus of “Salam” as shopkeepers and customers greet us one by one. Cars slow, their drivers wind down their window and shout “Welcome to Iran!” Excited children gather to shout “Which country?” or “Where from?” – the few words of English they can remember from school. It’s worth noting that these small towns are where Islamic faith is at its strongest… 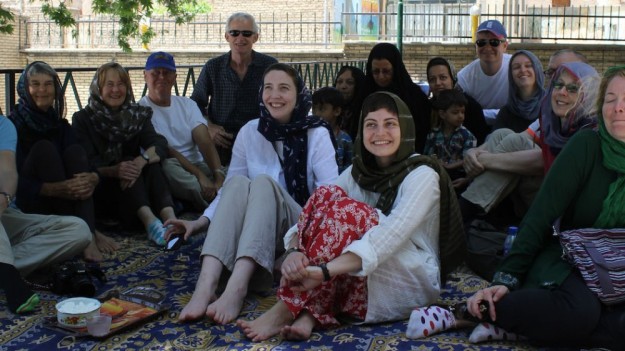 From relatively modern Tehran to stylish Shiraz and stunning Isfahan to the tiny tea stop villages, the welcome is universal – whether a handshake and a “salam”, a gentle tap on the heart or a “hello mister”. It’s also surprising how much English is spoken – we shared our picnic with a homeless man in a park recently who thanked and blessed us warmly in English.

British, Australian, Irish and, yes, Americans, are greeted just the same. “No problem for me, only the government”, a hotel manager said to me when I handed him a trio of US Passports. Whose government he was referring to didn’t matter; both are equally guilty of historic paranoia and mistrust. Majid, a chemist we met in the desert town of Yazd said “if governments talked to each other like you and I are talking there would be no problem”; wise and hospitable are not adjectives Western media use liberally when talking about Iran.

The best way to enjoy Persian hospitality is to indulge in the national pastime of picnicking. The weekend (Friday) is a great day to join families around the kettle and stoves in parks and public places across Iran to share friendship and laughter. In the small village of Bazm in the lush Bavanat Valley, we stopped beside a village Emamzadeh (shrine) armed with a couple of flasks of tea and some famed Yazd home made confectionary. We soon found ourselves nestled under trees in the adjacent park, enjoying the holiday atmosphere, lounging on mats with a dozen or so extended families. Sauces bubbled away in pots and saffron rice steamed perfectly atop burners – the Persian picnic is a full-on culinary experience! 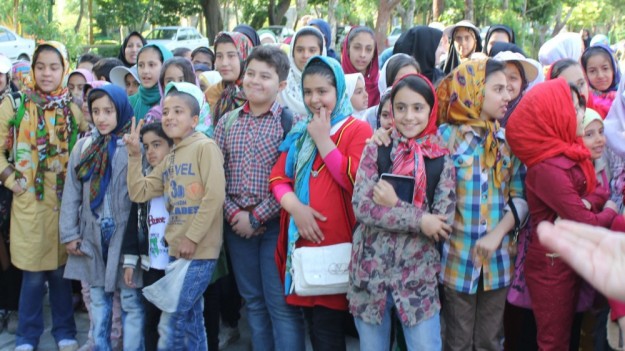 In the park we met Nilafar, who studied engineering on the Persian Gulf (60% of engineering graduates in Iran are women – another statistic for the headline writers).

“Have you seen an American before?”

“Only in the movies”, she replied calmly.

There was no alarmed reaction – just a scramble for photos.
…

The Friday call to prayer from the mosque briefly interrupted the chatter and laughter around the park. A hapless looking priest wandered outside looking for business, but here, as elsewhere in Iran, people are voting with their flasks…

My final memory of an amazing month spent in Iran is the holiday atmosphere in the mighty Naghsh-e Jahan Square in Esfahan. Its size may no longer be ‘half the world’ but it’s beauty and grassy verges draw Esfahanis and visiting Iranians every Friday evening. Long gone are the days when the Safavid Rulers sat on the terrace of the Ali Qapu Palace overlooking the square to watch polo; the square belongs to the people now.

After 10pm the square is still full of families, sitting on mats beside spurting fountains and coloured lights surrounded by beautifully tiled Islamic domes. Young children – up way after western bedtimes – run around with oversized saffron ice creams. Beside the tea flasks, kebab burners and pots and pans are everything from toy cars to table football games. Everyone wants to offer us food, drink and friendship. It’s hard to imagine such a sober, cultured and friendly atmosphere in a western park late on a Friday night.
…
In addition to the natural beauty and historical sites, we visited mosques and madrassas on our travels. Often called ‘hotbeds of religious fervor’, we found them to be tranquil oases of study and peace, where the warmth of the welcome humbled us. Learned people from the religious schools came to greet us, interested in our nationalities and religions, before posing for photographs.