In 1939, Poland was invaded by Germany and the Soviet Union. The war and the destruction caused by heavy bombardment resulted in the displacement of millions of Polish civilians. Most of them were sent by Joseph Stalin to Russia as prisoners in labor camps in Siberia and other parts of the Soviet Union. It was not until Hitler invaded the Soviet Union in 1941 that Stalin freed the Poles and agreed to the creation of a Polish army to fight the Nazis, and that’s when the great journey started. Iran was chosen as the rendezvous point of the now-free Polish prisoners in Russia. […] Every day, more ships came from Russia bringing more Poles to Bandar-e Anzali. Some Poles also entered Iran from the north-eastern city of Mashhad. 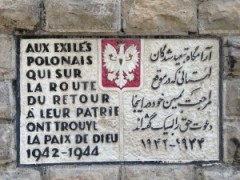 The healthy men and women were organized in an army and were sent to join the war effort. The rest were sent to Tehran and Ahvaz. The sick were treated in hospitals in Tehran, and the American and British Red Cross donated clothes and food. Additionally, Polish language classes were established for the kids. The orphans were sent to Isfahan. Ryszard Antolak claimed that Iranian civil authorities and certain private individuals vacated the premises to accommodate the children. Schools, hospitals and social organizations sprang up quickly all over the city to cater to the growing colony. The new Shah took special interest in the Polish children of Isfahan. He allowed them the use of his swimming pool and invited groups of them to his palace for dinner. […]

After the war was over, many Polish men, women, and children who lived in Iran went back home. The Poles who lived in Iran, even for a little while, however, always remember Iran as a great host. As said by Ryszard Antolak, “The deepest imprint of the Polish sojourn in Iran can be found in the memoirs and narratives of those who lived through it. The debt and gratitude felt by the exiles towards their host country echoes warmly throughout all the literature. The kindness and sympathy of the ordinary Iranian population towards the Poles is everywhere spoken of.” In the summer of 2008, the Polish postal service issued a stamp commemorating the role of Isfahan in caring for Polish children. Source: www.mypersianspeakingfriends.org

In all, between 114,000 and 300,000 Poles are thought to have made it to Iran. […] “The friendly Persian people crowded round the buses shouting what must have been words of welcome and pushed gifts of dates, nuts, roasted peas with raisins and juicy pomegranates through the open windows,” wrote Krystyna Skwarko, a schoolteacher who came with her own two sick children to take charge of a growing orphanage in Isfahan. Skwarko’s book, “The Invited,” recounts a journey from Anzali, through Persia and on to New Zealand, where she and 700 orphans were eventually resettled. She died in 1995. More than 13,000 of the arrivals in Iran were children, many orphans whose parents had died on the way. In Russia, starving mothers had pushed their children onto passing trains to Iran in hopes of saving them. Skwarko’s impossible task was to wipe the scars of war from children who had been robbed of their childhood. […] Jewish orphans were cared for by a Jewish organization in Iran and later sent to Israel. Others went on to new lives in the United States, Britain, Australia, South Africa, New Zealand and elsewhere. Source: Cornell University Library

Book on this topic: The Children Of Esfahan – Polish Refugees in Iran by Abolqasem Jala