Kuhrang (Koohrang) County lies in Chaharmahal and Bakhtiari Province in central Iran. The capital of the county is Chelgard. Rural areas in Koohrang have a temperate climate with beautiful landscapes.

During Spring, from early April to early May, grow fritillaria imperialis, called often “inverted tulip” in Iran. Its main habitat is Zagros Mountains and the greatest flowers are found in Kuhrang. 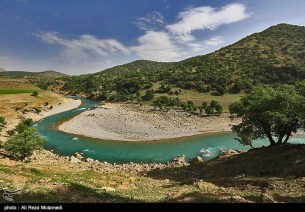 The Lion Tombstones (shir-e sangi or bardshir) are a type of tombstone in the form of a lion, found mostly on the graves of Lor and Qashqai (Ghashghai) nomads in the west, southwest, and parts of southern Persia. The major concentration of these statues in today’s Iran are in the province of Khuzestan.

These lions statues stare out from isolated Bakhtiari graveyards in many valleys and across the Zagros Mountains, along the migration routes of the tribes. They mark the graves of unknown chiefs and warriors who died in local battles and can be found individually and in clusters.